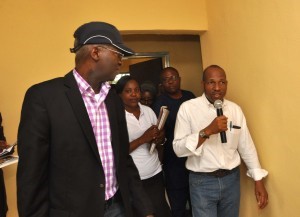 Speaking during an official site visit to the 400-unit GrandLuvu project developed by Fuller Housing on Friday, the 14th of October, 2016, the Hon. Minister of Power, Works and Housing, Mr. Babatunde Raji Fashola (SAN) stated that sustainability is key when it comes to the provision of Affordable Housing for ordinary Nigerians. The minister who came in the company of top Directors from the Ministry inspected the Basic Shell (Studio and 1BR), the expanded and fully finished 1BR and 2BR and the finished studio and 1BR prototypes. He bemoaned the fact that so much capital was being tied down in a place like the GrandLuvu Estate due to lack of a decent access road.

The Minister who was ecstatic at the level of development carried out by the Fuller Foundation said; “What we need to do now is to double the capacities in many multiples and again address the problem of sustainable housing”, adding, “It is not that we cannot build houses but can we do this year-on-year? How many of this kind of site can we do every year across Nigeria?” He commended the Fuller Foundation for providing houses to ordinary Nigerians, stating that he has participated in various Housing fora this year, and had seen the presentation of Fuller on slides. In his words; “We made a commitment to oversee what our partners are doing. Remember, we had a Housing Summit recently and people like the Fuller Group are some of the sponsors and exhibitors who were at that Summit and they displayed then on slide what they were doing on site and I have come to see what is on ground”. With regards to the provision of a decent access road, the Minister said; “we designs would see if we can intervene working with the Nasarawa State Government to assist with this road”, adding, “That is what government should do now to provide the infrastructure that enables private business to carry on with its life”.

The Minister acknowledged that infrastructure, access roads, land and funding amongst others were some of the major challenges being faced by developers in Nigeria. He expressed satisfaction over what Fuller Housing was doing, but would love to see a scenario where the prices of the houses were further driven down. He said the idea behind the visit was to develop a “Bespoke” template where sustainable and Affordable House can be replicated all over the country and most especially, in rebuilding the North Eastern part of Nigeria after the Boko-Haram crisis. While thanking the Minister for including Fuller on his schedule of site visits, the CEO, MFF Housing, Sam Odia said that a large percentage of Nigerians do not earn much, and therefore needed to be able to get houses that they can afford, it is with this in mind that Fuller is providing houses for low-income earners in the country. In his words; “A large percentage of Nigerians are low income earners, therefore, it is our desire to provide houses that they can afford”. He stated that the cost of building affordable homes can be further driven down if the government can provide the necessary infrastructure.

The Millard Fuller Foundation (MFF) as a Christian housing organisation does not discriminate and works with people of all creeds & religions to provide on a sustainable basis, affordable housing for all in need by promoting collaborative and innovative partnerships with individuals & organizations