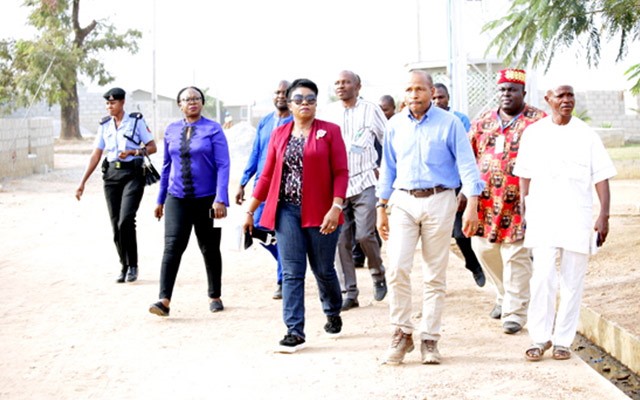 In pursuit of the Federal Government’s desire to improve the welfare and morale of federal civil servants in Nigeria and in particular their housing needs, delegates of the Federal Integrated Staff Housing (FISH) alongside the top management and staff of the Infrastructure Concession Regulatory Commission (ICRC) paid a scheduled working visit to the Corporate Headquarters of the Millard Fuller Foundation on Friday, 8th December, 2017. Led by the Permanent Secretary, Head of Service, Mrs. Didi Walson-Jack, mni, and the Ag. DG ICRC, Engr. Chidi Izuwah, the delegates were welcomed by the management of the Millard Fuller Foundation.

In a brief address to the delegates, Sam Odia, the CEO,Millard Fuller Foundation said that affordable housing is a term used to describe dwelling units whose total housing costs are deemed “affordable” to those that have a median income. In other words, “affordable housing should be affordable to at least 50% of the population”. Odia further said “In as much as we are building houses, we see what we are doing as social engineering. This is because we are empowering people economically. For example, we engage 38 persons per block of flat that we build and since the inception of our organization, we have provided 4,149 temporary jobs.” “We started building and selling our houses for as low as N260,000 (Two hundred and sixty thousand Naira, only) 11 years ago; though there was wide disbelief. But the houses were bought up in no time because the people who came to us were in need; their houses had been demolished.”

The delegates were then taken on a tour of the Fuller Projects made up of Phase 1 and 2 of the GrandLuvu Estate, of which over 212 units have been completed, while about 400 units are presently under construction at the lintel level. In a brief comment, the Ag. DG, ICRC, Engr. Chidi Izuwah said Fuller was doing something unique and the government has a role to play by providing an efficient and effective transport system to move people from the satellite towns to the city centre. Visibly impressed by what she saw, the Permanent Secretary of the Staff Welfare Office of the Head of Service Mrs. Didi Walson-Jack thanked the CEO and the entire team for their contribution to the affordable housing sector. She further said that FISH would return to Fuller for a technical analysis so as to kick-start a partnership between the two organizations.

The FISH program which was initiated by the Head of Service of the Federation, was designed to provide affordable housing for federal civil servants through an integrated strategy involving group land acquisition, site services, infrastructure development, inter-ministerial collaboration, utilization of expertise among civil servants, support from federal and state governments, federal agencies and parastatals, structured and syndicated construction and mortgage financing, goodwill of socially responsible corporations and philanthropists, and strategic partnerships with private developers, international development agencies and multilateral institutions.

70% Of Nigerians Belong To The Bottom Mass Market